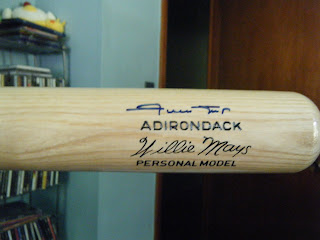 Yep, not eight minutes after my post went up yesterday, was the signature guessed. Wickedortega guessed quick and correct (the man knows his stuff), and has won an yet-to-be-determined prize. It'll be cool though. I am holding in the picture above a bat signed by Willie himself. Personally, I feel the two best living players to sign a bat would be Hank Aaron and Willie Mays. I'm counting it strictly on home runs though. No, Barry does not (and will not ever) count in my book. Hank is the true Home Run King. Then the Babe, then Willie. Griffey would be a fantastic bat to have signed too. Hmm... So yeah, a new piece of memorabilia for the very small collection. Nothing else but those signed baseballs and that Vernon Wells mini helmet. It's a start though.

Also on my mind as I write this, is that the 2011 Topps Update sell sheets are live (see bdj610's Topps Baseball Card Blog for more details) and I am kinda excited for it. Yes, more of the same but the new parallels look cool, although I won't be chasing them, they would be nice to get. The best part? The Hank Aaron veteran short print that was shown! Finally Hank joins the fray. I know they do it based on who they have the license for but its about time. Who else can we hope for in series two and Update?

Sandy Koufax
Pee Wee Reese
Robin Roberts
Mickey Mantle (they did it with series 2 in 2010...)

Well, we'll just have to wait a week for series 2 and until October for Update to see who they add in there. I know the series 2 sell sheet showed Nolan Ryan (awesome) and another Babe Ruth (huh?). Personally, I'd love to see all these guys in there but Topps may think otherwise. I am going based on who had autos in series 1 (well, not all these guys had autos), and those who I'd really like to see.

OH...and the best part. If you noticed on the Update sell sheet about the two new parallels (the hope diamond and cognac) they speak of the rest of the 709 cards in series 1 and 2 will be available in those colors too. 709 total minus the 660 regular cards equals 49. These 49 are for the short print legend variations from series 1 and 2. Meaning I finally got my answer, that there are only 24 short prints in series 1 and the 25 will be series 2. Weird way to get my answer but there it is.
Posted by moremonkeys138 at 11:10 AM