The final round is here. It's been a ton of fun and I hope you feel the same. I had a few posts that I wanted to do but didn't want to interrupt the flow of the break. Now I kinda forgot what I was going to post. Guess I should have used the draft feature on here huh? Oh well, I'm sure I'll think of it. Anyway, a couple of things about this round.

1- The silk cards count as one pick. Three silk cards for one pick made sense to me seeing as how they aren't really relics or autos or even all that special but they aren't the easiest things to get, being numbered to fifty. Plus they aren't the most recognized players out there. So one participant will get all three (just say 'silks').
2- The octo-relic is shown in the second picture on the bottom. The back with the other four players is below that picture. So remember, thats EIGHT players with EIGHT swatches on ONE card. I know, friggin' crazy. It even comes with a separate card for it's certificate of authenticity. Normally relics have it on the backs but this card can't even fit it!
3- The Bill Hall and Chad Billingsley are both autographed but are a little faded. This is due to the materials that Upper Deck used and I do hear they will replace them.
4- Being the final round, I will do one post concerning the break after all these have been claimed. On with the picks! 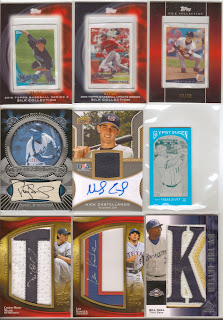 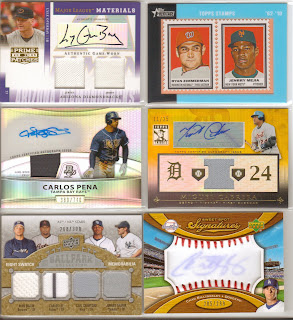 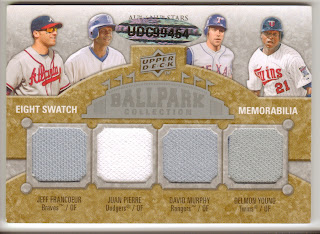