no idea what took so long 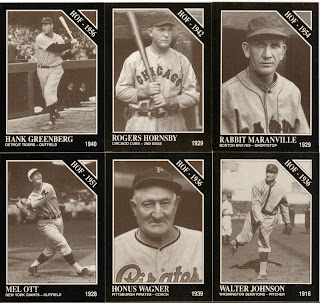 ...to get in on these sets. The Conlon Collection is a massive showcase of early 1900's baseball. Seriously, what took me so long to pick these sets up? It has everything I look for in a set that focuses on older players. Excellent black and white photography by Charles Conlon and TONS of information on the card backs. When I say massive, I mean massive. They issued five sets annually from 1991 to 1995. The 91-94 sets each had 330 cards and they straight numbered them to 1320 (bigger than Upper Deck!) and the 1995 set had the endcap 110 cards, bringing the total set up to 1430. Thats a lot of baseball history there. As of now I have 1-990, 1991-93. I picked them up new and cheap on eBay and when I opened up the 1992 set, this card was on the outside: 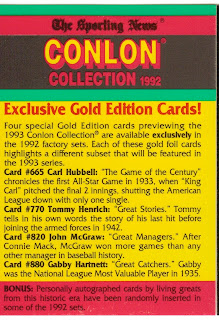 Pretty cool, gold cards eh? What is this at the bottom:

Autos too? Cool. So check out what was hidden behind two of the gold cards: 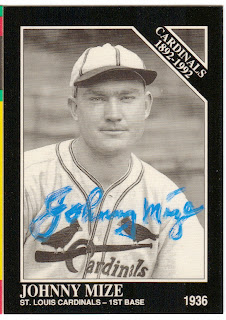 A Johnny Mize auto. Yep, I just pulled a Hall of Fame auto from a 19 year old factory sealed set. Pretty friggin' sweet if you ask me. Weird marker they used for the auto though, reminds me of crayon, even though it is not.

I may try to get the 1994 and 1995 sets but they tend to carry a premium online due to their scarcity. I remember having some of these when I was younger but probably dismissed them because they were "a bunch of old guys", and I wanted anything Topps Gold (seriously, I was a fiend for 1992 Topps Gold). Besides, where else can I get a card of Rabbit Maranville?

Tomorrow I will tell the tale of a card that went on a journey that I thought he may never reach home. Plus I'll give something away. Stay tuned.
Posted by moremonkeys138 at 10:34 AM