Oh boy. OHHHHHHHHHHHHHHH boy. Who put all this junk wax into my scanner?? 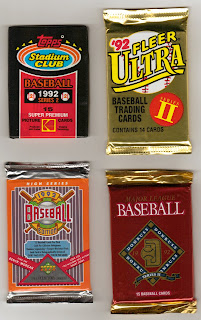 Ok ok, I did. This weeks pack pick comes in the form of four packs (wow, four companies...) from the year 1992. Yes, probably the most over produced year for baseball cards ever. Maybe 1991 is really king of that but 1992 has to be close. With the exception of the Donruss pack, I can't really consider any of this to be junk. Ultra and Upper Deck were both solid issues and would be worth it had they not made billions of them. Stadium Club also kinda falls into that category but I don't consider it to be as worth it as UD and Ultra. Donruss, well....its '92 Donruss, what do you want from me? I needed another pack from '92. As per usual, the pack with the most votes will be shown on Monday, with the second place being Sunday morning, when voting ends. Funny thing about these pack picks and Random Pack Mondays are that I don't open the packs until right before I have to scan and post them up. So even I have no clue what they hold, and when I find out, you find out shortly thereafter. Vote now!
Posted by moremonkeys138 at 12:32 PM