So the packs are ripped, the cards sorted (sorta) and 2011 Topps is well underway. I know many of you have ripped your own haul and shared the results, so here's mine. Starting with the hobby box and blaster from Thursday: 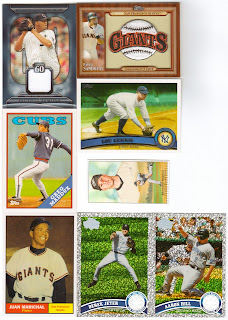 The only real good thing that came out of this was the Gehrig short print. The Sandoval patch was from the blaster and the Carmona relic was from the box. Yay. More boring Topps base relic fare but relics are not why I buy Topps' flagship set. The Maddux and Marichal are both original backs but the Marichal is damaged in the corner, along with the Morrow mini, which lost a fight with the pack sealer. The Jeter and Hill diamond parallels were the best of the bunch of all the parallels. 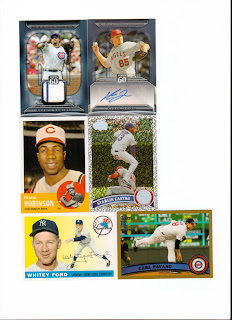 Now, the jumbo box. Hey, I know what you're thinking, "Where is that second relic?". Well, I didn't get one. Again. Thanks Topps, this is like the third or fourth box without a promised hit. I know, I know, I can contact them and get it but its not worth the effort for a three dollar relic of a guy no one cares about. I'll count the two original backs, Castro diamond and Pavano gold as my third 'hit'. Oh and a Kevin Jepsen auto. Whoever he is.

I'd like to point something out that I haven't seen posted as of yet. Check out the Gehrig and a regular card close-up: 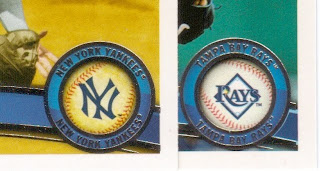 It appears that on the legends short prints, they made the ball dirty and old looking, while the current players are that nice white. A nice touch there by Topps, plus it makes it a little easier to identify a legend...I guess if you had trouble with that...probably not but nice to know regardless.

Well, totally lame box hits but I did finish off the set. I haven't inspected every card yet to see if I pulled and sparkle shines (or whatever we should call them) variants. I looked at every card when opening the packs but a thorough inspection was not given. I'll have to run through them again. I have gotten a few requests about the diamond parallels and I think for now I am going to keep them. I highly doubt I'll try for the set, so they may go up for trade. When they do, I'll let you guys know.
Posted by moremonkeys138 at 7:13 AM