Alright so the contest is going incredibly well. Fifty-three entrants as of right now! I love reading your responses as to what your favorite Topps year is. Very interesting. I don't believe I have picked a favorite yet but I think it would have to probably be 1987. I had so much of that year when I was a kid collecting that I swear I must have had two full sets. Not that I would know because I wasn't even close to being organized. I kept them in a shoebox. I didn't care though, they were still great.

Now. For the update. Since this contest has gone so well that I have upped the ante. Now instead of one winner takes all, there will now be THREE winners. That's right three of you who entered will win the one of each year full run of 1952 to 2011 original Topps cards. I managed to pull together a half a set (twice) last night and filled in the rest today at the show. As it stands right now, with 53 entrants, that leaves about a one in eighteen chance of winning. Not too shabby. I plan on using the random.org site to pick a winner. I'll still announce the winners Monday. If you haven't entered yet, do it now!

These came today in the mail. I won them off eBay for about 99 cents each. 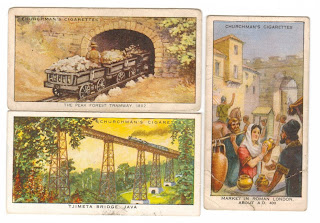 Put out by Churchman's Cigarettes around 1930. They apparently came out with all sorts of crazy sets. Just in these three examples alone are three different sets. The Market in Roman London is from the Story of London series, the Peak Forest Tramway 1802 is from the Landmarks in Railway Progress series and the Tjimeta Bridge is from the Wonderful Railway Travel series. See? Weird stuff. Seems that they had flags and birds and such too. They are about the size of a standard tobacco card like the T206s. I thought they were cool and were only a buck each.
Posted by moremonkeys138 at 10:01 AM