a couple of things here

First thing I would like to mention, go on over to Clear Cut Cards for a really easy and great contest. Just comment on his post with your favorite major and minor league teams and you're in! He is giving away a pack of the Infinite Baseball Card Set, which is a really great chronicle of players that you many not hear about too often. They are handmade and look awesome. Check 'em out!

Alright, down to business. The nice, shiny luster of Topps 2011 has worn off. The rose colored glasses have come off, if you will. Mainly, I like the set. A lot. The inserts however, I really either like or just plain can't bother with collecting. I've whittled down what I am collecting to just the 60 Years of Topps reprints and Lost cards, Vintage Reprints and Kimball Champions. Everything else is disposable really. The 60 players are boring looking, Diamond Duos are re-hash and the History of Topps I get and will read when I have all ten but certainly won't keep. I have a few internets and Wikipedia. Topps Town are completely useless to me as I don't use them or want to collect them (and I've already grown really really tired of getting one per pack but at least they look alright). Anyone who is collecting Topps Town, please PLEASE let me know. I have a literal ton of them that I will gladly send to you. One reader gets them all if you want them.

I hit Wal-Mart today for a few packs and I saw that they had a $9.99 box with 72 cards. It also contained one 'exclusive sapphire blue insert card', which turned out to be this, thankfully: 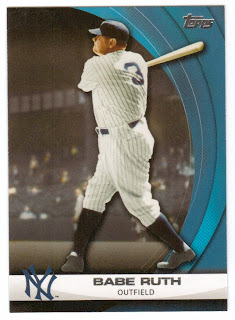 Now, this I can kind of get behind. While it looks like it came from last year, it is lightyears better than this: 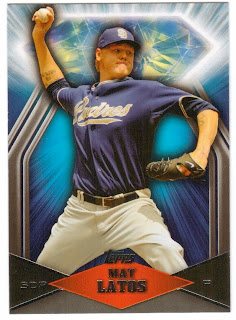 This is HORRIBLE. I hate these so hard. They are terribly boring and could have at least foiled the diamond so it doesn't look as lame as it does. Thankfully I've only pulled one blue and three reds. Ugh.

Speaking of 'ugh', why the hell aren't these numbered??

I can't stand when they just won't number the damn cards. I first experienced this with the Peak Performance in the 2010 NFL set. No numbers, just letters with the initial of the last names of the two players. Stupid, just number the cards already!

Another point of interest may be the Diamond Giveaway. I have read that many of you have been popping in your codes and getting the same lame cards they did last year for the Million Card Giveaway. With the exception of that one guy on the Blowout forums that hit a diamond 1 of 1 card, no one seems to be having much luck. I may not do it and just sell all my code cards on eBay and let someone else worry about all the 1990 Topps they have to try and trade away. I certainly don't want a die cut version of the horrible Wal-Mart/Target inserts either. Get that crap out of here.

Man, it sounds like I have nothing good to say. That's quite the opposite though. I think Topps did a great job on the base cards, the diamond gimmick may be silly but it does cause me to carefully look at each card now. Which is something I have neglected to do before and it has really made me appreciate the excellent photography of this year. I still love pulling a legend short print, that won't change. I think really, I just like the base set over everything else this year, while last year everything was pretty new to me so it was all exciting in some way. It really made me want to collect everything from the 2010 set and I did. This year is different though. Since a lot of this year is rehash from last year, it makes me think a little different and not collect everything. Essentially though, now I'll have more trade fodder to help you guys finish off your sets and want lists.

One last thing and speaking of want lists. Anyone still needing to finish off 2010 series 1, 2 or Update, PLEASE contact me with a list of what you need. I have almost a full set of all three series that I am more than willing to send to those in need. Just leave a comment or shoot me an email, get me your list and address and I'll see what I have and send them out. No need to send anything in return, as they are better off finishing a set than rotting away in a box over here.

Whew, well if you read to the end here, thanks for sticking with me. Looking forward to seeing your 2011 want lists!
Posted by moremonkeys138 at 12:29 PM