pack pick results, with a twist

Ok, so this week's pack pick was super weak. I thought it would be neat to pick four packs from different manufacturers, from the same year. Oh well, blame it on lousy product...or my silly thinking. So I'm mixing it up a bit. The winning pack is featured today. I'll have something better in store for tomorrow. So, without further hesitation: 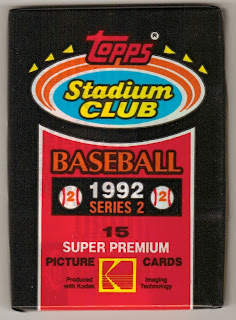 1992 Stadium Club. The SC line lasted quite some time, as I discovered when I got back into collecting. I always knew about it and had many cards from the first couple of years, 1991 to 1994. Apparently it lasted until 2003. I had no idea until I started getting some Jays from those years and being kind of amazed that it was still around. Topps tried to bring it back in 2008 but it seemed to fail quite miserably. Who knows? Maybe 2011 will be the return of Stadium Club? Anyway, enough talk, here is what we got: 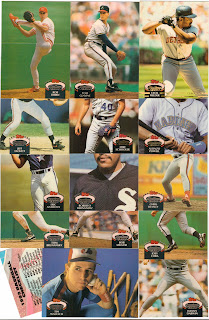 Dibble goes into the 'guys from Connecticut' portion of my personal collection, along with the checklist hanging out in the bottom there. Yes, I collect checklists. I don't go out of my way for them but I do have them all in one place and it is a personal collection box. The Fielder 'Member's Choice' is cool too. I remember having these types of cards in '92 and we thought they were the greatest that SC had to offer. Turns out they weren't all that special because they were just part of the base set. Oh well. Decent pack, still a great design, with the full bleed photos and miles beyond the flagship set photography. Obviously though, that was the whole push of this set. Speaking of photos, what is up with Tim Wallach at the bottom there? What's that baseball tellin' you Tim? Amusing. Until tomorrow, with a better pack in hand.
Posted by moremonkeys138 at 7:07 AM