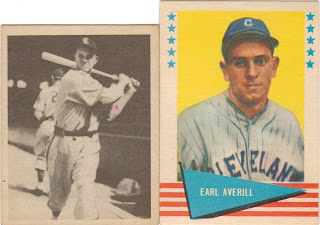 Today's random vintage comes from two companies who no longer produce cards, and subsequently two companies that were both were owned by Upper deck at some point. The shorter card on the left is Play Ball circa 1939. It is Myril Hoag of the St. Louis Browns. I like cards depicting teams that don't exist anymore. Well, they do technically but you know what I mean. The taller card on the right is from Fleer's 1961 Baseball Greats set. According to the back of the card, Howard "Earl" Averill played for Cleveland, Detroit and Boston. His son, Earl Averill was an active player for the "new" Los Angeles Angels in 1961. The Fleer set was the standard card size we know today, while the Play Ball is the same width, but shorter than the standard. The Play Ball's also look like they might be old photographs at a quick glance. This is the only Play Ball in my collection right now but I do plan on getting some more of the different years they produced which were 1939 through 1941.
Posted by moremonkeys138 at 9:16 AM