vernon on the left coast 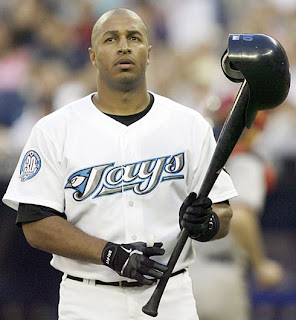 So. It seems that Vernon has been traded. The only active player I currently collect. The guy I thought to myself, just two weeks ago, would be the perpetual Blue Jay. Who would probably retire as a Jay. Nope. No longer. He got traded to these guys:

Oh sure, its a logo they no longer use from the 70's but it gets the point across. Now, upon hearing this news, I immediately thought of my collection. What would I do with it now? I can't possibly collect him any longer because he doesn't play for Toronto. Then I thought about things logically. Would folk who collect Ken Griffey Jr. no collect him because he got traded from the Mariners to the Reds? Maybe a few but I'm willing to bet the majority would stick by him and collect him as a player they enjoy watching and following. I decided to continue collecting him no matter where he ends up.

Logically it also makes sense for the team itself. By not having to pay his hefty contract, they are free to buy up some younger talent and build a young, competitive team. A team that can hopefully contend with the likes of the ultra tough AL East. The Yankees and Sox are always on top. Baltimore had a really horrible start to the 2010 season but really picked up steam towards the end and I feel they will be a major competitor this coming season. Tampa Bay seems to be in shambles but they did pick up two aging sluggers in Johnny Damon and Manny Ramirez but we'll see if that does anything for them. All in all, while I am not fully a fan of this trade, I do know and understand why Toronto did what they did. Its just good business. I wish Mr. Wells the best in LA (or California or Anaheim or what ever they want to be called this year) and I'll poke my head around to see how he fares over there.
Posted by moremonkeys138 at 2:02 PM