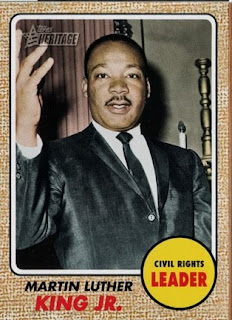 First, I would like to acknowledge Martin Luther King Jr. day today. Being a fan of history, I feel he led one of the most important social causes in America. Its really too bad that people like him and John Lennon, who only tell people to get together and stop the hate, live in peace and spread the love, get killed because of their views. Too tragic, but their legacies live on, with the spirit and emotion that they gave to us and left behind when they were taken too early from us as a people. The legacy of Dr. King lives on as strong and empowered as it always was. 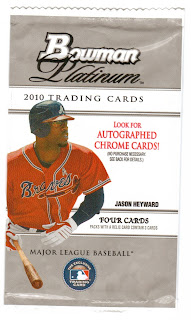 2010 Bowman Platinum retail. I have seen the huge division over this set and it seems that either you love it or you hate it. I happen to like it quite a bit. As I stated in an earlier post, I feel its a good mix of veterans and rookies without so many no names, as Bowman tends to have so many of. Here is what I got: 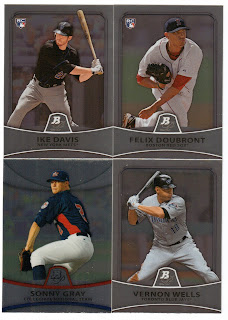 As you can see, retail packs feature four cards, as opposed to hobby's five. This pack was pretty good. I got the Wells I needed and it had an Ike Davis (I like Ike, remember). I don't know Sonny or Felix but they'll be for the set if I decide to end up finishing it off. I'm always a sucker for shiny and this set is nothing but.

Next week's Monday pack will be chosen by you. I have some Topps packs coming in the mail and later on this week when they come, I'll pick a few out and you guys pick which one you want me to open. We'll continue this until I run out of packs, I guess. One last thing of note is that my wife has gotten her blog up and running kibblez-n-britz, about her various adventures in cooking. So if you are into some good cooking (and I think she is going to start adding her knitting up there too at some point), check it out. It's good eats!
Posted by moremonkeys138 at 12:01 PM