1984 Topps is the winner and will be shown on Monday. We have a tie for second between the Sportflics and 2000 Topps. How do I remedy this? Well, how about I do them both up right now? Lets start with: 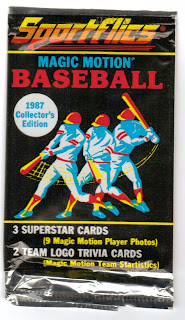 1987 Sportflics. Score before it was Score. I may have opened up one of these when I was younger but I really have no idea. So we'll call it something new that I've never opened. Lets see what we got: 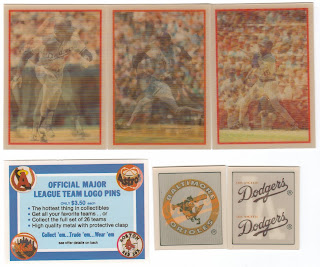 These don't scan particularly well. We got a (from left to right) Pedro Guerrero, Bruce Hurst and Cecil Cooper. Also in the pack was a redemption/send-away thingie for team logo pins and two team mini-flix of the Dodgers and Orioles. This set is quite interesting, Sportflics always have been. They tried to bring them back I think in the late 80's/early 90's but I'm not sure they were successful. 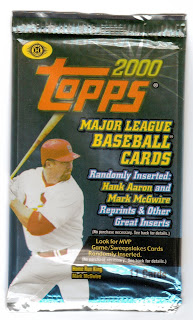 Definitely a pack I've never opened, as we see 'then home run king' Mr. McGwire on the front here being that he was all the rage in 2000. Lets see the contents: 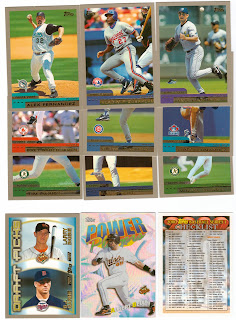 Decent pack. A Jay, Bret Saberhagen (who I've always known to be a Royal but looking at the back he's played for a couple other teams), Tim Raines and a Vlad. I've never heard of either of the draft picks on that card and hey, we got an insert! A Power Players Albert Belle (odds 1:8 packs). A checklist too. 2000 Topps is an interesting issue. Its all vertical, front and back, which is unusual for Topps but I think I really like. Reminds me of early Fleer stuff. Well, mid-80's to early 90's Fleer stuff.

That about does it. Was this a good idea? I like the idea of Random Pack Mondays and even more I like the voting on which you'd like to see. I like to make things interactive. Plus its better seeing and reading about something you chose to be written about. More fun that way. So I think I'll keep this idea going. I'll post the packs to pick from on Thursday, end the voting on Sunday morning, rip open the second place pack and save the winner for Monday. Sound good? Until tomorrow, when 1984 looms above us. Did I get the Mattingly rookie? We'll just have to wait and see...
Posted by moremonkeys138 at 7:13 AM