So here we are with another edition of Random Pack Monday. Today, as per your voting, will feature 1984 Topps. The key cards from this set are the Don Mattingly and Darryl Strawberry rookies. 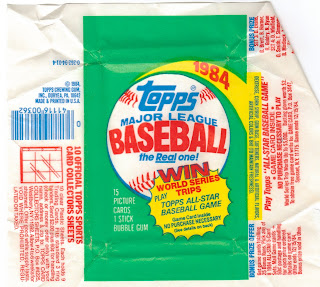 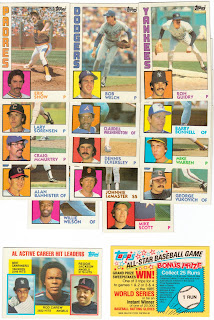 Overall a blah pack really. Ron Guidry and Dennis Eckersley are the highlights here, maybe the leaders card. I really like the '84 set. Its got a nice design and holds up well even today without looking dated (unlike 1990 Topps). Classy all the way. Even though the pack was uneventful, it was still a good rip. Old packs are fantastic to rip even though a card is usually ruined by gum (like poor Mike Scott was in this pack).

In a related but totally unrelated sort of news, I recently purchased the other 12 cards I needed for the exclusive Chrome wrapper redemption set. Remember my original pack included the Mantle, Davis and Posey cards. Apparently each pack is the same configuration, meaning you will get the same three each time you see Ike on top. Well, I also bought an unopened one from a seller for around 6 bucks. It came today and contained the same three cards I got from Topps, with an exception, check it out:

What of all the dumb luck. The Posey auto numbered 07/90. In-freaking-credible. Here I was totally regretting buying the pack because I had bought them all already and it comes today with that. Now, as awesome as this is, this card has sold on eBay for $250 and $293. Those were the only two that had ended within the last 30 or so days. I believe this one may join them.
Posted by moremonkeys138 at 11:50 AM