A many thanks to the folks that commented on my last two posts. I figured I'd address them here, rather than in comments. Everyone made good points on the Upper Deck subject. While their photo quality was above and beyond everyone else, they did have collation issues. I've run into that many times with their products and sometimes their sets seemed...irrational. They took the Topps excess with parallels to a whole new level of absurdity. Topps was more complete with their stats too, and most of the time have better backs to their sets. Upper Deck's seem to all feel the same really when you compare their stuff through the years.

The other topic was of my (lack of) collection. You are all right. I thought of the birthday thing and even was thinking about a hometown/state sort of thing. The OCD thing stops me, but I plan on telling it to shut up and sort some damn cards out that I want to keep! I did find some stuff when I looked after I posted. I pulled all my Jackie Robinson, Lou Gehrig and Hank Aaron cards, as I feel these guys are the true heroes of baseball and I probably don't want to trade their stuff off anyway. The other cards I did pull were something I've spoke of a couple of times: 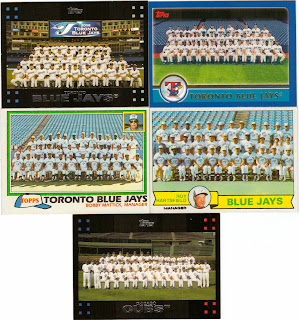 Team cards! I really like these and decided to pull them out of my Topps box. They stayed in the sets, and the Jays stayed in the Jays box, unless I had a duplicate, then it went to my new team card pile. Collecting, here I come!
Posted by moremonkeys138 at 3:19 PM