As I sit here listening to my beat copy of Pink Floyd's Dark Side of the Moon on vinyl (complete with cracks and pops and full warmth that only vinyl can bring), it makes me think that 1973 was a pretty damn good year. Look at these: 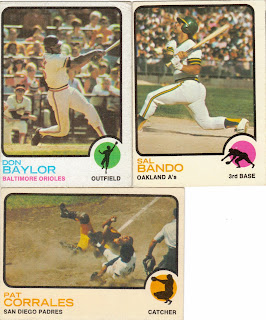 1973 Topps is where its at. I know I talked of how good Upper Deck photography was, but this set is definitely the innovator in the picture department. Very weird though, it seemed as if this set were just an experiment. Why? Well look at the years that follow. In fact, look until around 1992, because Topps did do action shots but it wasn't until that year that they stepped it up (this time probably due to Upper Deck directly). 1973 had so many action shots, that it really stand out as a fan favorite. I know its more than a few of you guys favorite year for Topps baseball. Seems that it was a year of change for Topps, as it was the final year for the series release format. The design was simple, yet classy and clean all at once. Nice big picture on the front with a great photo to go right in there. While they aren't all action shots but the ones that are really stand out. Too bad Topps didn't follow suit with the next 20 years of releases, otherwise we wouldn't have to have so many cards like this:

Three superstar players, and this is what they give us? Come on, Henderson was stealing bases in his sleep! I am digging Eddie's 'stache though. If these guys were playing and in the 1973 set, I'll bet their cards would be awesome.