Being primarily a Topps collector, I tend not to buy much from other companies. Well, now I have no choice, but if things were different, I'd still feel the same way. Not when I was a kid though. Baseball cards were baseball cards, no matter who made them. Anything and everything was what I wanted. When growing up I had an overabundance of 87, 88 and 89 Topps, but I also had a ton of these: 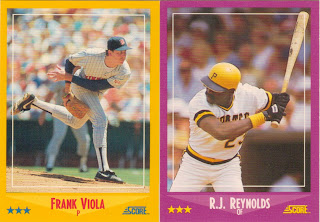 1988 Score. I had so much of this color explosion, that I probably had a set and had no idea (or the patience to assemble it, I was 6 or 7). So this set holds a fond memory of collecting for me just as 1987 Topps does. Years later came this: 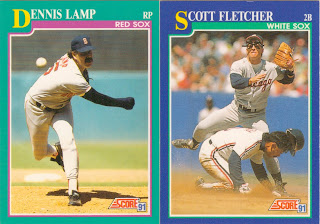 1991 Score. This set is so BORING! Personally this design is one of the most boring sets ever released and I had so damn much of it! Plus it had like 73,925 cards! Its not all bad though, some of the sub sets were kind of neat...in a 90s sort of neat. very colorful. That was Score though. So much color in every set, that with every 110 cards or so in a year, you got a new color! Red to blue to green to white for rookies! so much color! Well, that was the 1990s decade. Ever seen these: 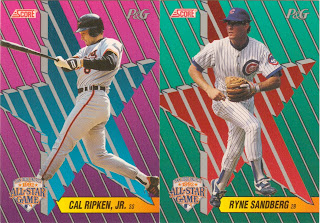 Released in 1992, they were a Procter & Gamble giveaway. SO LOUD! So many colors just screaming at you! Then they released these: 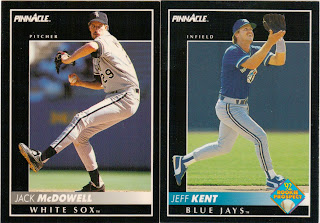 1992 Pinnacle. This set just looks bad-ass with all the black. Kind of plain now, but I remember seeing them at first when they came out and thought they were great. Its really too bad about Score (or Pinnacle Brands). They were sold off to Donruss in 1998 and now used for Panini's low end football set. Just not enough room in the dwindling but rapidly expanding card business of the late 90's.
Posted by moremonkeys138 at 12:56 AM