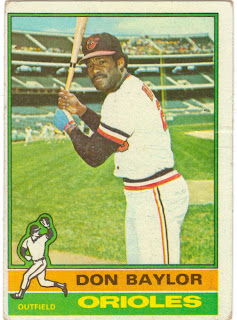 Word on the street...well...the internet....street, is that the Blue Jays organization interviewed Don Baylor as a potential manager for next season. His first managerial position was with the then new Colorado Rockies in 1993, and led them to their first winning season in 1995 (77-67). He stayed until 1998, then became the Chicago Cubs Manager for the 2000 to 2002 seasons. He worked mainly as a hitting coach in between and after those two tenures. I think he would make a good addition to the Jays as their skipper. They have the talent to play, and Cito led them in a great direction, and I think Don could do the same. We'll see what happens. He isn't the only name being thrown around, nor are the Jays the only team to be looking for a new manager. They join the Braves, Brewers, Pirates and the Mets in that category.
Posted by moremonkeys138 at 1:14 PM