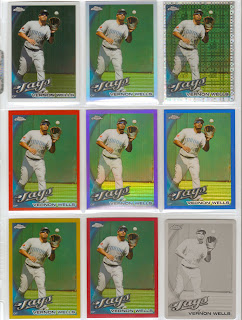 Topps Chrome. We all know what its all about. Refractors, tons of parallels, autographs, etc. etc. Having bought Topps Chrome from earlier years, I knew collecting 2010 would be a hard, wallet draining task. Four cards in a pack and one maybe two is an insert/parallel? Nuts to that. Packs are not the way to go for Chrome. Well, I wanted a set, and decided to try something different that I normally do. I was going to buy a box for the trade fodder, and then I would buy the set and the couple of cards I wanted and see if I could spend less on the set than the box. How'd I do? Lets take a look.

The box I purchased cost $75. Ended up with a refractor auto and a redemption auto. One Blue Jay card. ONE! Out of a full box. This certainly would not do.

Here is the list of what I wanted out of this set and what I paid on eBay (with shipping, because I did pay for shipping so I count it as cost for card):

I would consider the plate an option due to it not really being part of the rainbow but I knew once it popped up, I wanted it. So I didn't spend less on the cards I wanted, but I would have spent a fortune to get all that in packs So I would say it worked out in my favor (kinda). This method may be what I may do in the future to save myself some headache and more importantly, cash. I would totally miss the fun of ripping packs and putting a set together myself, which is why I bought the box. Plus you never know if that box had the Strasburg superfractor auto.......right. Well, it was a hobby box, so it is a possibility. Speaking of hobby boxes, Topps is super conservative on the parallels this year. I seemingly got almost none. Not true of course, but it was very little.

That being said I have many Chromes for grabs if someone is trying to finish a set. BA Benny has laid claim to some Yankees, but other than that they are for trade. If you have a want list, let me know.
Posted by moremonkeys138 at 2:02 PM