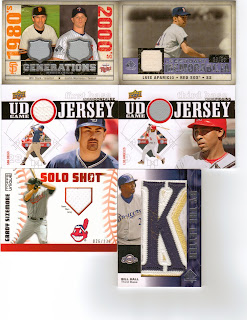 The Sizemore, Gonzalez and Figgins are just your run of the mill swatches. The favorites are the others: the Bill Hall letter is signed on the 'K' in gold, the double swatch of Morneau and Clark is awesome. I remember having a bunch of Will Clark's when I was a kid, and Morneau used to play in New Britain. The best of the whole lot though is the Aparicio. The fabric is a beige color due to the age (I'm guessing), or the type of fabric they used back then. Either way its great to have a HOFer relic in the collection. All in all a great bunch of cards for only seven bucks, I would have figured someone would have at least bid on it. Oh well.
Posted by moremonkeys138 at 5:42 AM