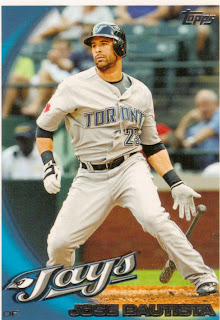 Being a fan of the Blue Jays on Facebook, I get their updates regularly. The post up results from the previous nights game, the line-ups for the forthcoming game, posts about upcoming events at the stadium and sometimes polls asking what fans think about different things. One such topic that has come up a few times in the past couple of weeks, is asking fans how many home runs Jose Bautista will hit this season. He has already passed the franchise record of 47 set by George Bell in 1987. With 49 hit so far, and 14 games (including today) left in the regular season, I think its fair to guess he will hit around 52. Thats my guess anyway. I had guessed around 52 about a month ago, seemed fair. I don't think I would be surprised if he did hit a couple more beyond that but 52 is where I'll stay. Its also good to see SOMETHING come out of Toronto, seeing as how the playoffs are a definite no go. With 229 (as of right now) home runs this season by the whole team, they are way ahead of everyone else in terms of homers (with Boston being in second with 195), its just too bad they couldn't win some games with those numbers! Anyway, what total do you guys think Bautista will end up with?
Posted by moremonkeys138 at 9:19 AM