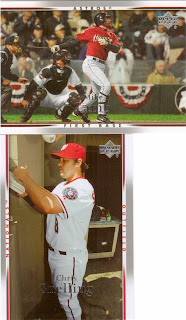 Generally I consider myself a Topps collector, almost exclusively. I'll dabble in other brands stuff but more often than not, I'll stick to Topps (well....now I have no choice). Target sells these repack packages of 10 packs for 10 bucks. Its an interesting mix of stuff, usually from 2006 to 2009. Much of it is 2007 and 2008 though. They are fun to open up when I'm looking for something to rip open and I don't want anything else on the shelf. Many of these repacks have a lot of 2007 Fleer Ultra and 2007 Upper Deck, both of which I've grown to like very much. Especially the Upper Deck set. The minimal silver border on two of the sides, the as usual great photography, it just really appeals to me. I won't collect the set, its well over 1000 cards but I definitely won't pass them up when I get them in these repacks or where ever I find them. Nice set. I think 2007 seems to be a year I like most of the set designs, seeing as how I stated in an earlier post that I'm a big fan of 2007 Topps and Fleer.
Posted by moremonkeys138 at 5:03 PM