its not alan hale but...

Cameron over at Reds and More... recently decided and posted up that he would like to send out team lots of all the teams he didn't care about (ie; anyone who is not a Red). I jumped at the chance to get his Jays stuff, and sent him over some Reds in return. What he sent over was fantastic to say the least. Some autos, inserts and a ton of cards I didn't have. It was the following card though, that really caught my attention: 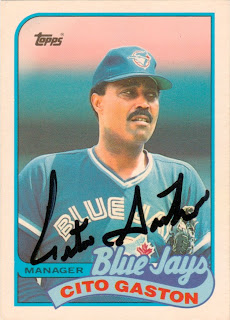 The skipper himself! His 1989 Topps Traded card, signed by the man himself. I asked Cameron where he had obtained it and he said that he had gotten it during Spring Training in either 1990 or 1991. Incredible that he has held onto it that long. I find it to be really great because I have very little stuff that I had back in 1990. Its one of my new favorites, and I don't plan on it going anywhere any time soon. A HUGE thanks to Cameron for the great card! Check out his blog and claim your team if you have not done so already, as he has some teams left to clear out.
Posted by moremonkeys138 at 9:59 AM