baseball cards around the world- part 1 (of 4)

I spent a lot of time at the card shop last week. The owner went on vacation and had three of his friends/customers watch the store for him. I was one of them and worked about 22 hours over there during the week. It helped that my real job had Monday off, so I was at the shop all day. I went through boxes upon boxes of cards. Namely to see if there was anything good for him to sell, pull any Yankees/Red Sox and rookies. While doing that I'm able to see if there is anything I'm interested in and put it aside. I came across a binder that had a big mish-mash of cards from the early to mid 90's but three cards I put aside (I'll show them in a different post) inspired me to grab a few things off eBay.

I'll call this limited feature 'Baseball Cards Around the World'. Although I am only tackling two countries, I feel they deserve their own posts. Today I'll feature a pack from Australia: 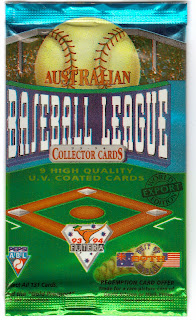 Australian Baseball League Collector Cards from 1993-1994. Apparently this set is put out by a company called Futera. At 131 total cards, this is a small set. The pack tells me to look for Gold Prospect subset collection cards and redemption cards good for a rare picture card of David Nilsson or Mark Ettles. I am sure excited.

A little background, as stolen from Wikipedia; Apparently the Australian Baseball League lasted from 1989 to 1999 and had anywhere from 6 to 9 teams playing in a season. Weird. Seasons were 42 to 62 games depending on how many teams were playing that year. Players also used aluminum bats and they use the designated hitter rule down there. Neat.

Here are the base cards. They look pretty 90's to me. Name going vertical? Check. They are a nice quality though. Not flimsy, nice gloss on the front. Some nice cards here. Check out the backs: 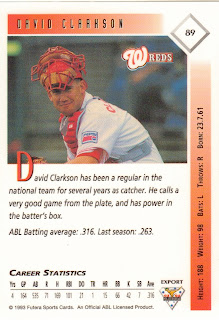 Seems pretty basic, kind of reminds me of a Fleer product. One line of career stats and a little blurb about the guy. Not bad but not great. 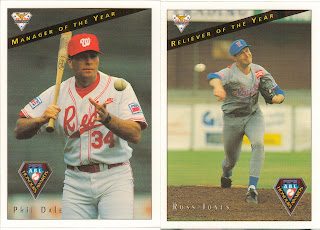 This is an awards subset for best of the year guys. Here we have manager and reliever of the year. 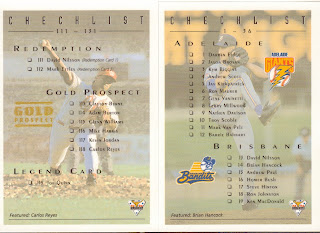 Yes, this single pack of nine cards netted me two checklists, crazy. They do break it up by team though, as Fleer did in their sets. 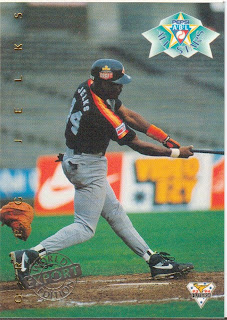 Here is one of the all star cards. With both gold AND silver foil on the front (impressive!) and a full bleed picture, this is easily the best card in the pack. Although, if you notice the background of Mr. Jelks card here, you'll see NO ONE in the stands. Maybe thats why they only lasted ten seasons...


The final three parts will come from the same country but as I said I feel they deserve their own posts. This won't be an every Wednesday sort of thing, so watch for parts 2 through 4 in the future.