I went to the monthly card show this morning. I had two objectives: hit the dime boxes hard and pick up some 1971's.

I did IMMENSELY well on both. Nick, you'd be proud.


First up the dime box finds: 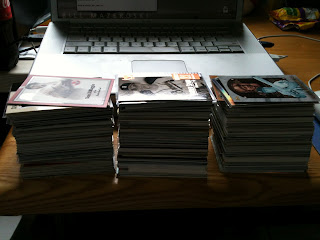 I spent thirty dollars on dime boxes. THIRTY DOLLARS!! The usual dime box guy who I hit each show had epic cards this month. I walked away with roughly 370 cards. He does a 60 for $5.00 deal. I had to buy a box from another vendor just to carry them all. I usually have a lunch bag and that does me good. Not this time. 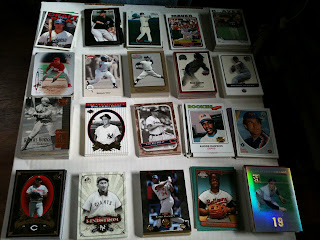 
Here is my top ten finds of the dime boxes: 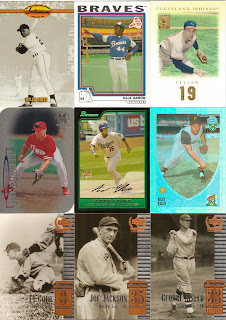 The Mays card is awesome with 'The catch' in the background, Hank comes from 2004 Topps retired and yes, thats a Bob Feller Tribute card. A Tribute card in a dime box. Pat Burrell is made of metal so thats neat. The Ethier rookie was obvious and Roy Face is numbered. The bottom three come from that Upper Deck Century Legends set I mentioned above. I grabbed probably 50 cards or more from this set alone and these three were the absolute best of the bunch. Look at the Cobb! I know I've mentioned it before but you just can't have too many Shoeless Joe cards and if you look closely, you'll notice that Sisler is playing for the Senators. He where he played a single season, so this card is exponentially better than anything I have for him.


That's only nine you say? Well thats because this was the best dime box find: 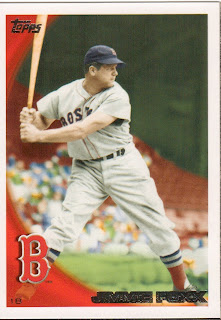 Yes, I have it already but I'm not passing up a short print legend for ten cents.

The crazy part about this haul is I had to stop myself! There was still another box to go through. I only went through two 3200 count boxes! There was so much awesome stuff that I'm still in awe with what I've found.

As for '71's, I hit three dealers but did the most damage to my wantlist from my vintage guy, Larry. We're on a first name basis now, I see him so often. Well, I ended up with 73 towards my set today (plus I picked up 67 from my local shop, cleaning him out of what I need) putting me at 513/752. I'd say it's coming along really well!


This was the best of what I got today: 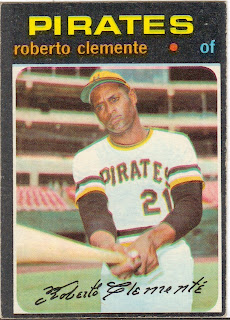 The big boy of the set. The highest booking card at $150 (along with Nolan Ryan, thanks carlsonjok, I totally spaced on that), I got it for a fraction of that. Sure it's got the double image thing going on a little but the condition is fantastic.

I gotta say, going for this set is way more satisfying than busting wax right now.


All in all, easily the best show haul I've ever had. So much great stuff that I'll be sorting for quite some time.
Posted by moremonkeys138 at 10:24 AM