perhaps the most interesting card in my collection

If you are a regular reader of this blog, you know that I really enjoy the history of baseball. I sat through and enjoyed thoroughly Ken Burns' Baseball. It ran probably 20 hours or so and I loved every minute of it.

Baseball is full of memorable moments. From the perfect games to the records broken. The home run races of 1961 and 1998. The years 1904 and 1994 in which a World Series was not played since it was introduced in 1903. Individual moments like the shot heard round the world. The catch. "The Giants won the pennant!!". Jackie Robinson taking the field in early 1947. Lou Gehrig's heartfelt and emotional farewell in 1939. The Babe's 'called shot'. The earthquake in 1989 before game three of the World Series. So many memories of a wonderful and glorious pastime.

Aside from the moments I have described above that are more than likely defining moments in many peoples lives who lived around the time they happened to witness them themselves, there have been a few moments that are oddities.

Canseco getting hit in the head by a fly ball that ends up fair and a home run. Larry Walker giving away a live ball to a fan. Merkle's boner. The list goes on.

One moment stands out for me as a real oddity that we will never see again. 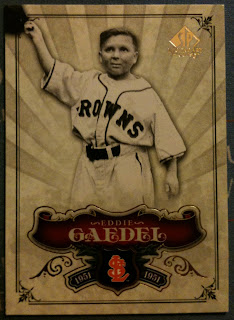 Eddie Gaedel played for the St. Louis Browns as a pinch hitter and had one major league at bat on August 19th 1951. He was 3 foot 7 and his jersey number was 1/8 and it is said that his strike zone was about a one inch square. As you can imagine he was walked on four pitches and was replaced with a pinch runner at first. He was also told that if he swung at any pitches he would be killed. I suppose Brown's owner Bill Veeck was serious. Here is a shot of him batting: 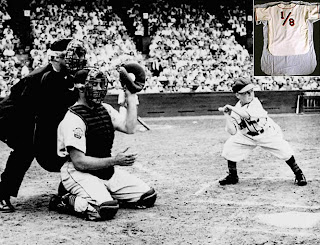 Eddie is known as the shortest player in history and has a 1.000 on-base percentage. His jersey is on display at the Baseball Hall of Fame. Sure it may have been some dirty play to get a man on base to hopefully win the game (they didn't) but it sure made for a memorable moment in baseball history. It's moments like this and the ones mentioned above that stand as the reasons why I love this game and its rich and colorful history.


On another note, Kyle over at Juust A Bit Outside is holding a 8 box break with some interesting boxes. Check it out, its cheap ($15) and should be a lot of fun. Go now!
Posted by moremonkeys138 at 4:20 PM