On to part two!

Its a little different this time around: 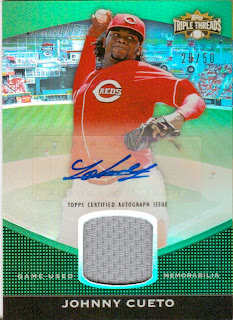 Johnny Cueto auto/relic, numbered 29/50. The auto/relic first? Well I feel in this box this was the lesser of the four hits. Still not bad but not the best. 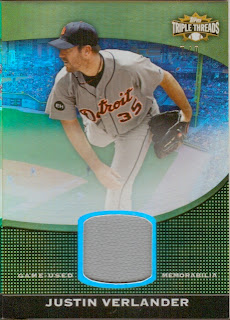 Justin Verlander relic, numbered 7/9. See what I mean? The 2011 AL Cy Young winner, numbered under 10. What's not to like? Sure its a single gray jersey but I'm certainly happy with it. 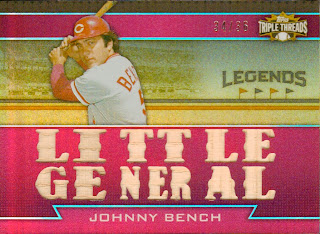 Johnny Bench triple relic, numbered 34/36. Here we go. Now I do feel that this is a Bench bat. Bench played in the 70's, so I would imagine that relics of his would be more plentiful. The thing is, I would think that relics from this era to now are authentic. I mean, they would have to be right? I'd hope. 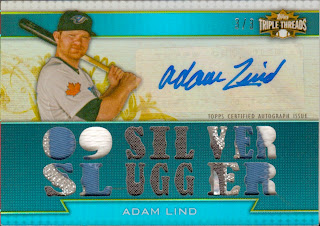 Adam Lind auto/triple relic. numbered 3/3. CRAZY CRAZY CRAZY. I could not believe that this fell out of the pack. Its certainly the best Jays card I've ever pulled and the new cornerstone of my Blue Jays collection. Sure I have a few plates and some low numbered jerseys and stuff but nothing this nice. Plates may be 1/1's but ehh...they just don't have the luster of a nice patch low numbered like this. I got a bunch of stuff from eBay and the shop from other people's boxes that they traded to the owner for other stuff and in return I'd trade him. Maybe I'll show it off soon.
Posted by moremonkeys138 at 1:00 PM