well, it's not office furniture but...

Remember a few posts back when I talked about the legitimacy of relics and how there is the possibility that they aren't what they are perceived to be? Remember it started with this card: 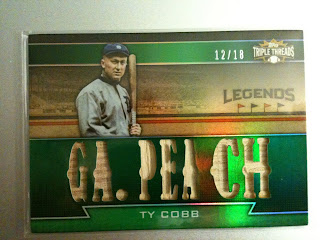 My sweet sweet Ty Cobb "bat" relic from Triple Threads. One of the nicest cards I've ever pulled, being questioned about its very existence and its possible deception about being what could be 2 cents of desk wood.

I went on to question the process of obtaining these bats and relics and such, wondering how many bats could Topps have used by Cobb, Ruth, Mantle, etc. Especially Mantle seeing how they give relics of his away with factory retail sets. How absurd and totally de-valuing a Hall of Famers relic in the process. Well all this started by my nature to question most everything and just wondering how Topps could have all this authentic memorabilia stacked up in their warehouse. It came into question again two days ago.

Topps recently put out their Tier One set. Curious of course, I decided to check out some stuff on eBay and found myself quite unimpressed by the results. Seven cards per box, about $80-100 per box. In said box, you get two autos (both on-card) and one relic. Well, I know what you're thinking, grab two of these and you equal a box of Triple Threads with two more hits! Well, that may be true but the relics are beyond dull. The design isn't horrible but single white/gray swatches? No thank you. On-card autos are nice but the odds of getting a great one are way high, so you end up with two OK autos and one dull relic. While with Threads you may only get four hits but triple relics are way better than single gray ones. Plus everything is pretty low numbered too.

Being unimpressed I decided to check out the BlowoutCards forums to see what the buzz was. I came across some guys questioning the authenticity of the relics, specifically the big timers like the Hall of Famers I mentioned above. Then someone posted a link to an article:
http://www.beckett.com/news/2010/01/topps-details-stadium-seat-relics-offers-replacements/

Apparently this isn't the first time it's come up. If you don't feel like clicking the article, or you can't here it is:

This just in from Topps…

Topps has confirmed that the following five memorabilia cards in the recently released 2009 Tribute Baseball include pieces of stadium seat:

Topps will replace any of the above cards with a pack of 2009 Topps Tribute Baseball or comparable product for collectors that are not satisfied with their card(s).

Moving forward, to ensure no confusion, stadium seat pieces will not be used as memorabilia pieces unless it’s part of a special stadium seat-specific insert.

Please send all items intended for replacement to the address listed below. Please allow 2-4 weeks for delivery.


INSANITY!!! Imagine pulling a Babe Ruth triple relic only to find out that its a uniform with two pieces of Yankee Stadium seating?? WTF?? Honestly, I lost so much faith in Topps after seeing this I almost debated on quitting the hobby. Oh and in case you may be wondering why I'm taking it so personally: 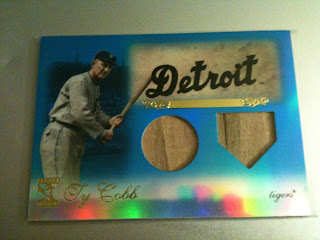 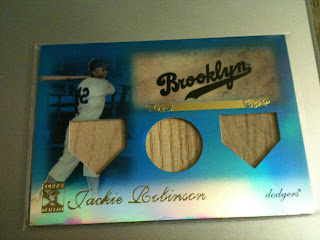 I own two of the relics they state in the article. I paid good money for both these and to find out they're stadium seats? Just totally disheartening. I don't even know what to say about it. I really don't. I'm sure that relics from current players are authentic but I have to totally question wether or not I have actual relics from guys that played 80 or so years ago and it totally shouldn't be that way. It's such BS but maybe instead of putting a Babe "bat" relic into every set numbered to 399, maybe get an actual damn bat used by him and making it actually rare. Like numbered to 18 rare. That goes with any older player. People aren't going to avoid a product because you can't pull one but pulling one would be all the better. I don't know. I know its cheaper but Its pretty bad that Topps has to mislead its customers like this.
Posted by moremonkeys138 at 3:59 PM