if you wanted to bust triple threads...

I am gauging interest on a group break. I want to do a Triple Threads theme break. With the couple of boxes I busted, the trades made at the local shop and the couple I picked up on eBay, I've gained a nice healthy amount of 2011 Threads. I know we can't all buy boxes of the stuff but I can try the next best thing.

For 1/5th the price of a box of Triple Threads you can make your own from the cards I'll post. It'll work just like my older breaks, with a list of pickers going in order.

A fifth of the price of a full box means $40, and for that you'll get just like a box:


Other than those, I'm also including the following to pick from and everyone will get:


The one relic and one auto will be from different sets, being what ever I have in my box here. I will also add in the following base cards:

Thats a total of 8 hits of your choice. Here is a sample of what will be included: 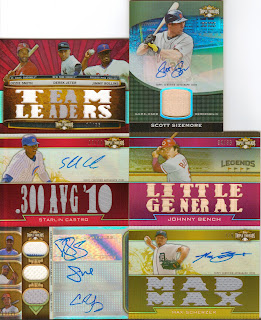 Interested? Let me know in the comments below. I will only have five spots open so act fast if you do want to participate. If interest is big, I can do another slot and if we do get 6 people, I will knock the $40 to $35.

Oh and everyone who participates will be entered into a random drawing to grab an autographed ball of a Hall of Famer. I won't say which player but if we get 5 to 6 people, thats a pretty good chance you have to grab that ball.