Here is box number one of the final Triple Threads of the year. Unless by some huge miracle involving time travel happens and the shop gets more Threads at a good price, this is it for this release.

The base cards in both boxes weren't anything low numbered like the sapphire Cabrera in the previous box except for an Alex Rodriguez numbered to 25. I didn't bother scanning it because it seems like everyone hates him. Let's begin shall we?

Again like last box, from "worst" to best. Worst is kind of the wrong word here but since I can't think of a better word, we'll stick with that. 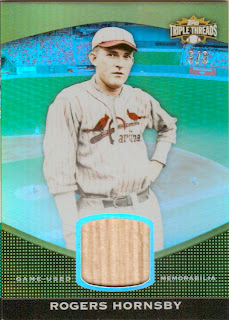 Rogers Hornsby "bat" relic, numbered 5/9. Lets say this is a real bat from Hornsby for arguments sake. If this is my worst hit, you know great things are coming afterward. 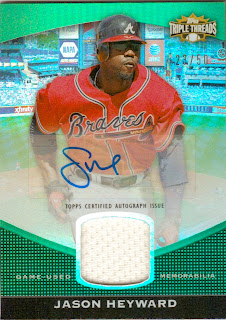 Jason Heyward auto relic, numbered 23/50. An awesome hit here. Heyward had kind of an off season this year but I'm very sure he will make a fantastic comeback in 2012. 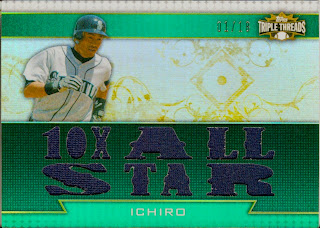 Ichiro triple relic, numbered 01/18. Damn. What a card and the only thing that would have made it better is if that had patches in those windows as opposed to a nice blue jersey. I'm not complaining though due to it being my first Ichiro relic. 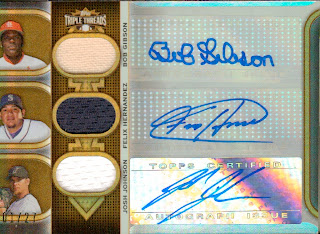 Bob Gibson/Felix Hernandez/Josh Johnson triple auto/triple relic, numbered 01/27. What a card. Sure its the smallest jersey piece with the smallest picture of the depicted players but when else can you get auto/relics of a Hall of Famer, a sure-fire superstar and an up and coming player? The only thing that would have made it perfect is the Johnson auto being on the clear stickers like the other two. Oh well. At least this combination of players makes a little sense, in that they are all great pitchers. Some triple combos I've seen make little to no connection unless its something random.

Stay tuned for part two!
Posted by moremonkeys138 at 1:00 PM