the cold, the frustration and the hit of a lifetime

We have power. After four and a half days of cold, darkness and no running water, we finally have light. The power went at 11:30 on Saturday night and came back some time today. Power at work came back Wednesday morning around 9:30, so I went in for 10. Thankfully we knew people who didn't lose power and were willing to help us out. I also want to thank you guys who expressed your concern towards our situation. I mentioned on Tuesday that we spent some time at the card shop on Sunday and the better part of Monday (to catch Walking Dead Sunday night and Monday Night Raw on Monday). Tuesday and Wednesday we spent time at my grandparents house. On Monday evening, bored, cold and pretty frustrated, my emotions and curiosity got the better of me and I made a spur of the moment purchase to quell my sanity: 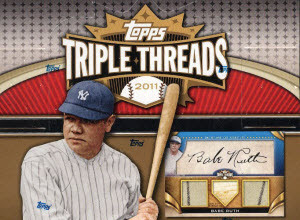 Yes, Triple Threads. Part of the reason I busted this was due to what had been pulled right before I got this one. He had two, sold one to a customer who busted it in the store and pulled a triple relic of Babe Ruth, Joe DiMaggio and Mickey Mantle, numbered 03/27. Ruth and Mantle were bat relics and Joe was a nice jersey with a pinstripe. Being numbered Ruth's jersey number doesn't hurt either. The other part was just wanting to go out on a limb and try my luck again. So I said screw it and put it on the credit card.

Well, as you can tell from my post title, I did hit something. I'll go in order from "worst" to best. I use the term "worst" very VERY loosely because all four hits were really good.


I'll start with the one base card that is of significance: 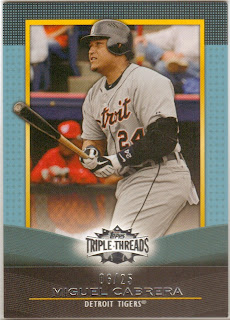 Miguel Cabrera 06/25. This is the sapphire parallel, which I haven't seen in person. The lowest numbered parallel I've seen before this were the golds, numbered to 99. 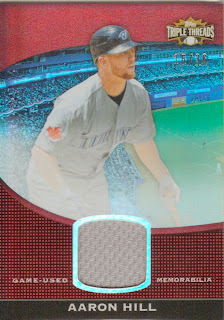 Aaron Hill 16/36. A single relic and it's gray but it is a Blue Jay and one I sort of collect so it worked out pretty well. 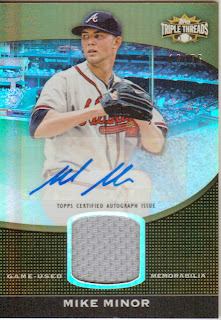 Mike Minor 10/75. An auto relic of a good Braves pitching prospect (or in the rotation, I'm not sure). 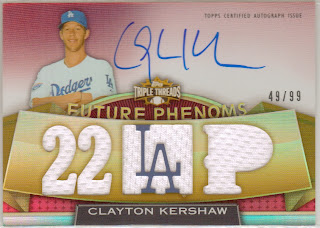 Clayton Kershaw 49/99. Auto'd triple relic. Now here we go. A great card of a great young pitcher, I was super excited to pull this card. Clayton is going to have a great career so long as he stays healthy.


Now the hit of the box: 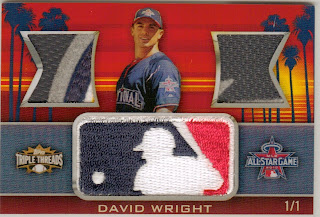 David Wright 1/1. Dual jersey with the logoman patch from his All-Star game jersey. You can't tell from the picture but it does have a refractor-like quality to the front. It is also plastic as opposed to heavy cardstock or paper at all. I really couldn't believe it. This makes the fourth 1/1 I have pulled myself, Jose Reyes plate from Chicle, the Soriano wood parallel from '11 Ginter and the Mets plate from Gypsy Queen and this. Notice something odd? Yeah, three Mets. Plus a Cub. I seem to have a knack for pulling Mets 1/1s. This is way above all of the put together though. The others are merely parallels. This is a card that there really is only one of and of a bona fide star player. They didn't make this in copper numbered to 50, sepia numbered to 75 and gold numbered to 100. They made one. That kind of blows my mind a little bit and can say that this is the only true 1/1 in my collection. I highly doubt I'll ever pull a bigger card in my collecting lifetime.

So the long week is now over and did have some bright moments including this card but more importantly being close to family and friends when we all had a little less to work with in our daily routine.
Posted by moremonkeys138 at 3:59 PM