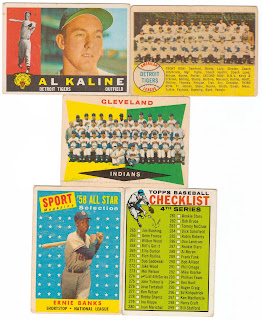 I'll start this post with the above picture. A couple of cards that I had won on eBay and received today. Cheap too, hence why I got them.

The unfortunate part of the post is that work has become incredibly slow. So slow that I'm not sure what is going to happen over the course of the next few months. It is forcing me to tighten the belt a bit on spending (which may be for the better seeing as how I probably spend too much already), just in case. We knew we weren't immune to this economic downturn but it has never been like this. So in short; the collecting will have to be on hold until I figure out what is going on. I already stopped buying packs/boxes/singles/etc. and will continue to do so for the time being. The couple of cards you see above were the final eBay purchase for a while too. I may even have to sell some of the stuff I have acquired just as a precaution. I will still make trades, read blogs and post when I have stuff to write but my apologies if my posts become sparse. Who knows maybe it's nothing but I don't want to be caught in a situation that I'm not able to get out of.

With that said, I do have one final giveaway box. I have a large flat rate USPS box that I will fill with cards. It already has some in there (1989 and 1994 Topps, 1988 Donruss), and I will add as much other years and brands as I can fit into it. Who ever wants it can have it. It is merely a downsizing of the stuff I really have no use for. As per my usual giveaways, send a comment saying you want it, then an email with your address.