I just completed a trade with Nick from the excellent Dime Boxes blog. You can see my end of the trade here.

He posted up some vintage cards that were available and I said I'd find something to trade him. I found a couple set needs and some other cards I figured he would like and sent them on over. His cards arrived today. 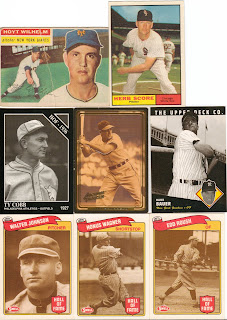 He has mentioned that we have similar collecting interests and the cards he sent showed just that. A bunch of old timers, some Conlons from the 1994 series that I don't own yet. The Swell cards are....swell. Really, I like them a lot and there were more too! I highlighted the players I actively collect above along with the Roush that I really like the sepia on. The Wilhelm was the oldest of the bunch and since Nick collects him, I assume this is a double. There were two of the Upper Deck cards in here and it really shows me that I have to get off my butt and get that set. I love the look of the Bauer above. The Action Packed card is great too, I've never owned any of them. Everything in the package was great.

Nick, thanks for the fantastic trade and I'm sure since we collect a lot of the same things I'm sure we'll trade again soon!
Posted by moremonkeys138 at 3:41 PM