I know I've tackled this subject before but lets examine it a bit closer shall we?

Relics. What does it mean to pull a relic? Elation? Money? Sadness? New trade bait?


What ever your feeling or motive (selling for the money), pulling relics from packs always elicit some sort of emotion. It's pretty cool...or is it?

Before I discuss further, lets look at some companies and their relics past. 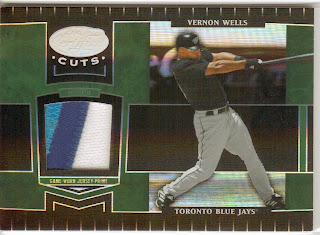 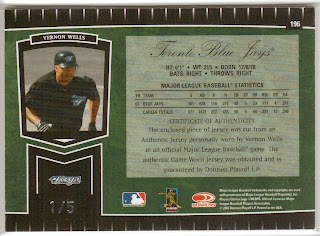 From 2004 Leaf Certified Cuts, this Vernon Wells patch is really nice. What's it say on the back about the relic piece:

"The enclosed piece of jersey was cut from an Authentic Jersey worn by Vernon Wells in an official Major League Baseball game. The authentic Game-Worn Jersey was obtained and is guaranteed by Donruss Playoff Inc."

Very straightforward and to the point. There isn't really any questioning what it is you are holding. 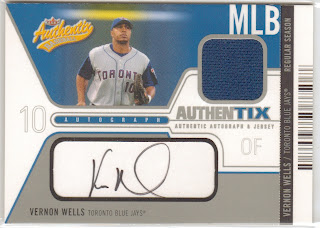 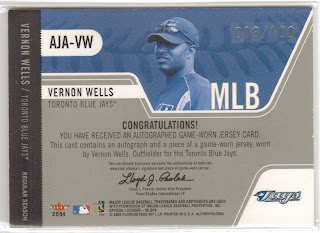 From 2004 Fleer Authentix Baseball. Since it's got an auto, let's see what Fleer has to say about their cards:

And the little text under that:

Well, if the first part wasn't clear enough, the second added part does the rest. Again, no real questioning what's in the card here.


How about Upper Deck: 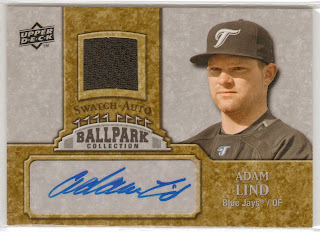 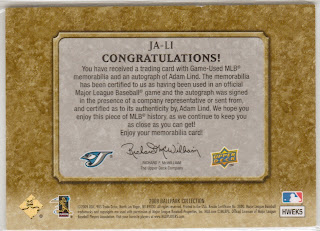 2009 Ballpark Collection auto relic of Adam Lind. What's on that back?

"You have received a trading card with game-used MLB memorabilia and an autograph of Adam Lind. The memorabilia has been certified to us as having been used in an official Major League Baseball game and the autograph was signed in the presence of a company representative or sent from, and certified as to its authenticity by, Adam Lind. We hope you enjoy this piece of MLB history, as we continue to keep you as close as you can get! Enjoy your memorabilia card!"

A little long winded but certainly casts out all doubt about the auto and the piece. They are even telling me to enjoy it, how nice of them. Even if these three companies had gotten their memorabilia in nefarious ways, which is rumored that Upper Deck had, they are still laying their company reputations on the line. Even if these are fake or what have you, I'm still better convinced with the wording on the backs of them that they aren't.


What about Topps though? It wasn't always like it is now: 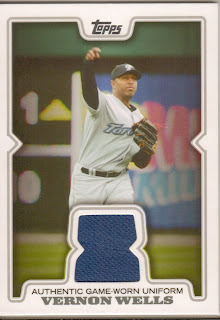 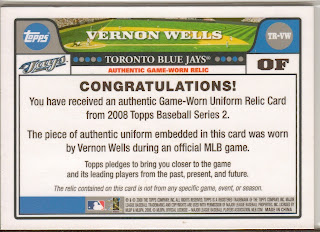 From 2008 retail blasters is this nice blue Vernon Wells relic, how about that back?

"You have received an authentic Game-Worn Uniform Relic Card from 2008 Topps Baseball Series 2. The piece of authentic uniform embedded in this card was worn by Vernon Wells in an official MLB game."

And on the bottom of the card is the now infamous "The relic contained on this card is not from any specific game, event or reason". I get it. You don't want to have to tie a relic to a specific timeframe, so you can use older relics from current players. Seriously, I agree with this but at least the card is telling me that Vernon did in fact, wear this uniform. Go Topps, actually telling us what's in our cards.

This is what we get now: 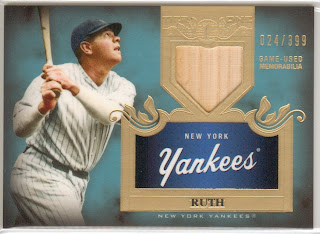 Notice on the front, under the serial number. That scary, ambiguous "game used memorabilia", which could mean anything. The scan under the front of the card is all we get on the back. That dreaded sentence about it not being from a specific yadda yadda.

Look, I get that relics aren't cheap to get, produce and pack out but how about a little trust huh? Really, look at the Ruth card. That piece of wood can be anything Topps has had certified to be "game-used". They have already gone on record to say that some of the relics from 2009 Tribute were stadium seating along with bat pieces.

Now, this is where it gets tricky. Since Topps has lawyer'd up their ambiguous "Game-Used Memorabilia", it obviously saves their butt. What about that Matt Kemp jersey you pulled from 2012 Topps series 1, who's to say it's actually Kemp's jersey? There is nothing indicating on the card that it is actually his. What if the jersey is leftover from Chris Shelton? Technically it's still game used but since there is NOTHING on the backs stating whose it is, we as the consumer, just assume it's Matt Kemp's. Honestly, I would find it hard to believe that the John Axford relic I pulled isn't Axford's jersey, as is the same with any current player but you just never know now.

What about Ruth there though? Do they really want me to believe that there are 399 Ruth bat pieces floating around? Plus the parallels of this card with two and three pieces? I know Topps wants everyone to own a Ruth or Mantle relic but you're really destroying the legacy and the value by placing crap in your cards. Never mind your reputation. Tier One is a high end bust at $90 a pack. There should be NO doubting what you get in your cards. Why does Ruth need 399? Why not actually have a Ruth bat piece and make it rare? Like 25 copies? THAT is special and worthy of the chase. Don't think I'm not appreciative of Topps or this very Ruth card. If the book wants to say its a $100 card, I'll take it. I just have to question what's in it for conspiracy's sake. I tend to lean that way.

Question the answers people.
Posted by moremonkeys138 at 12:34 PM