I was recently contacted by reader Greg (I apologize, I'm not sure if you have a blog Greg) about some Jays cards he had in his collection. I was interested so I checked out his wantlists and found him some stuff. I sent that out yesterday along with everything else. His cards also came yesterday and what a bundle of goodness it contained. 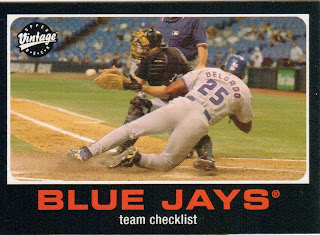 I don't have much UD Vintage, from any year, let alone the 1971 Topps rip year but this card easily takes the cake as the best photo in the box. It's a checklist card too!


Here are some other highlights from some of the more 'out there' sets from the 90's: 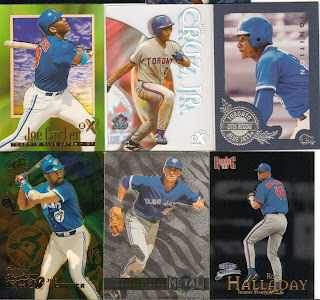 I remember these EX Fleer cards from when I worked at the comic shop, still pretty sharp cards if you ask me. I have no idea where the top right card comes from, except that it's a Fleer but the border is really nice and makes the card look classy. The bottom row left and middle are some loud 90's parallels/inserts that caught my eye and on the right is a super sweet, super shiny Halladay rookie from Fleer Brilliants. 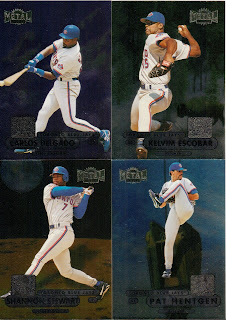 Speaking of weird and 90's, this Fleer Metal set is pretty puzzling. I know you can't tell from the scan but I assure you that Carlos Delgado is hitting baseballs on top of Mount Everest, Kelvim Escobar is hurling balls in a nearby forest, Shannon Stewart is on Mars and Pat Hentgen is pitching from atop a crane. Why he would be doing this, I am unsure but clearly these people are doing these things. Why else would they be on the cards like this? 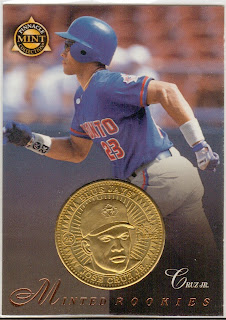 Here is probably the most interesting of the bunch. I've never seen these late Pinnacle coin cards, so its pretty neat to get one. 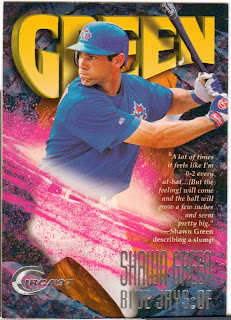 This though. I've run into this set while sorting through boxes at the local shop and I can say in full confidence that this is one of the worst sets I have ever seen. I can't get over how busy and awful this Circa 1997 set is. So bad in so many 90's ways but of course since we all hate 2012 Topps now, shouldn't this be what we're all collecting now? Yeah, anyone still hating on 2012 Topps needs to get over the drama. It's not hip to hate anymore.


Anyway, thanks for the trade Greg! There was a ton of cards in the box and this small sample only represents some of the weirder stuff in there. Otherwise it was a fantastic mix of cards from 1982 to about 2007. Great stuff and I'm not even done filing it all away yet! Thanks again!
Posted by moremonkeys138 at 11:44 AM