I haven't been to a show in just about forever. Two shows are held every month. The first and third Saturday of each month, both in different towns but both towns are next to mine. Today's show wasn't listed in the Beckett show calendar like it usually is but I took the chance that it was being held but wasn't on the Beckett site. Thankfully I was right and the show was indeed held.

Good thing I went too.

I made my 1973 Topps needs list last night. Also good that I did that too.

I knocked a whopping 88 cards off my list, leaving me with many many complete pages and about 88 cards left to finish off the set (plus 10 of the blue checklists). You can see what I need in my want list page on the right there. Here are the best of the bunch: 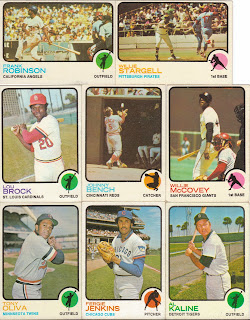 The best deal of the bunch? How about the Kaline for a buck? All because someone wrote 'Tigers' on the back of it. I'll take it. These knock out pretty much every star player in the whole set, save for Tom Seaver, Thurman Munson and the Schmidt rookie. Other than those, it's a lot of high numbers, including the checklist (card 588), which goes for about $20 or more regularly on eBay.

Other than the 73's I aimed for dime boxes and boy did I find some real winners.

I really beefed up my Griffey, Ripken and Frank Thomas collections, some great rookies (2 Josh Hamiltons, 2 Lance Berkmans, a Tulowitzki and a James Loney), some great legends players I collect like Mel Ott, Ted Williams, Hank Aaron, Satchel Paige, Honus Wagner, the list goes on. Some Blue Jays too, although there was only a handful. Some other cards of players I don't collect either but will probably end up in some of your hands.

I spent the majority of the time going through one guys dime boxes and came away with 120 cards. The last times I went to shows, I would look exclusively for Blue Jays in the boxes, namely to build up the Jays box. Now that the box is full and I have a new insight on the greatness inside these dime boxes, I came away with a whole new experience and a huge batch of cards I may have overlooked before.

A very very successful day at the show for both my 1973 set and my various Player collections.
Posted by moremonkeys138 at 11:37 AM