Lets rip some wax...well, plastic. While going through my box of packs, I decided to open one up. 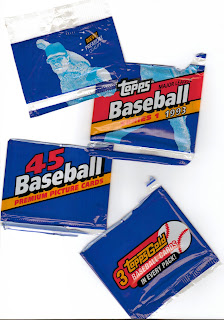 A 1993 Topps rack pack. 45 cards of early 90's goodness. Normally I wouldn't even bother showing what I got out of a pack of cards from 1993 but this pack had so much star power, that if I had opened it up in 1993, I would have squealed with delight.

Here are the first nine: 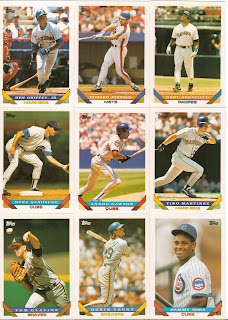 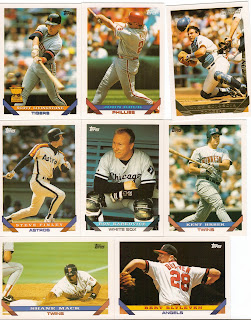 A rookie cup! Hrbek, Kruk and Finley are some good players. Blyleven in what seems like it may be his final card (I forget if he is in '94 or later) and a great picture of Mack. I like the casual Karkovice with his catcher gear on in the dugout. The gold is Mike Scioscia, another quality pull. The other two golds were Jeff Parrett and Chad McConnell, a draft pick for Philly. Wow. What a rack pack. Seriously, five Hall of Famers and a gaggle of other good players. Too bad 1993 Topps is so overproduced...
Posted by moremonkeys138 at 9:22 AM