One, I know A&G has been out seemingly forever but I had an idea to finish up a "set".

and
Three, I know it's almost 'the thing to do' around here but hate on the Yankees is something I don't do. I'm a Jays fan first and a Yankee fan second.

Now, with all that out of the way, I'll get on to what I'm talking about. I admittedly picked up too much Ginter this year. I said I wouldn't but I did. I did finish off the set last week, all 350 cards. No extended minis for me. No insert cards either. Out of all the Ginter I did pick up, I managed to get four Yankee relics. Yes, horrific pulls for some (not you AJ or BA Benny) but not for me. I then decided to see how many Yankees there were in the set, saw that there were 12 and figured I could pretty easily get the rest. I pulled arguably the most pricey one (Jeter) along with three others I'll point out below. Oh and how much I paid for them too. 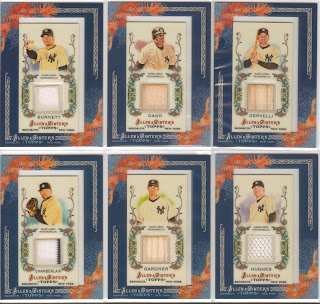 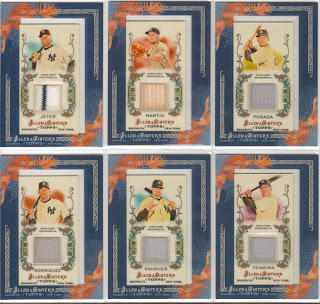 So as you can see, the most expensive one was Alex Rodriguez at a whopping three bucks and change. If you can finish off the Yankee portion of this set so cheap, every other team should be pure cake. I was also very thankful there wasn't a Mantle relic. I really didn't want to have to shell out for that. Some of these come in two variations, those being either a bat or jersey. I would prefer jerseys but I took bats where I did to get them on the cheap.
Posted by moremonkeys138 at 11:20 AM