As I noted on the bottom of yesterday's post, 2011 Topps Lineage is in stores. Well, hobby stores anyway. I think everyone forgot about this set, or they just didn't care. Hot off the heels of Allen & Ginter and last weeks Bowman Platinum, Lineage seems like a fun set collector's set. Here are the base cards: 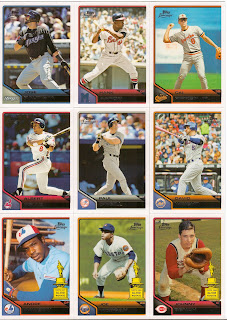 Personally, I think these look awesome. I believe they could have held this design for 2012 Topps and I would have been happy with that. A 200 card set, that has an excellent mix of stars new and old. Even some faces we haven't seen in a while make a return here (see Belle and O'Neill). As you notice in the bottom row...Rookie Cups! They took 10 guys who never got a rookie cup card and gave them one. They are the final 10 cards in the set (191-200) and the trophy on the front actually says their rookie year, which was a nice touch. Seeing Ripken with a rookie trophy is pretty cool. My one complaint about the set is the backs, which I'll get to later.

Here are the parallels of the set:

These follow suit for the 1975 mini issue. Same size and everything. The players do have the same picture on the mini and the regular card, which different pics from the base set would make this parallel set a 'must collect'.

These are modeled after refractors essentially. Super shiny goodness.

These are just like the series 1 and 2 shinys. Nothing wrong with that at all. These look good with this. 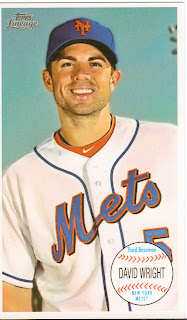 Here are the Topps Giants. These come one per box and have a relic parallel. There are 20 of these and seem like they are the same size as the originals.

Now, on to the inserts:

These are the 3D cards. Kind of hard to tell on here but they look pretty good in person. Kind of like the Topps 2020 inserts from last year. There are 25 of these and they are un-numbered.

Anyone collecting in the 80's surely remembers these. These look awesome with modern players on them and look pretty true to the originals. I think there are 20 of these as the back indicates but the checklist seems messed up and says 19. Topps QC strikes again. 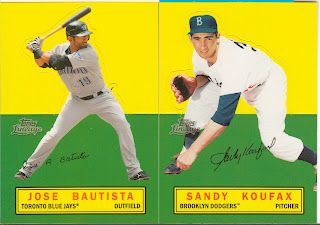 These are Stand-Ups. Fold 'em and see your favorite players come to life!...or something. Kinda neat. 25 un-numbered cards to collect here. (did I mention I hate things that are un-numbered?)

The cloth stickers. May be hard to tell but these are kind of flimsy, as they are actually cloth. 50 of these suckers to collect and stick everywhere! 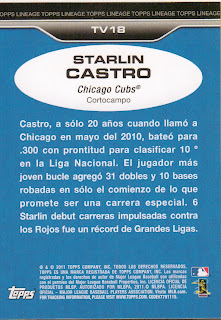 Now, here is the card back. Yes it is in Spanish, as these are the Venezuelan inserts. The fronts are the same as the base set but they are numbered TV## and have Spanish on the back. 25 cards here. See, the back is the only fault in this set. I would have preferred lifetime stats on the back (and even more preferred would be a vertical back with a tiny pic and vital info and stats but oh well) but the writing is at least interesting.

Here are a sample of the hits. The McCutchen auto is a reprint auto, where Topps reprints a card and has them sign it, on-card. They range from 1952 Topps to 1990 Topps for Nolan Ryan (as used on the sell sheet) to Andrew's 2010 here. Nice idea, I say. The middle auto is from the 1952 autograph set and features current players in the (now kind of droll) 1952 design. Decent names too like Posey, Jimenez and Freeman. The final card is the relics. They come in the 1975 mini style. Not much more to say there. They also have a jumbo relic too but I haven't pulled one.

In conclusion, I think this is a really great idea and I think Topps has done a fine job capturing some of their oddball heritage that we may (or may not) fondly remember during our collecting in the days of yore. The base set has a slick design that I feel outshines many of their flagship releases with its simple yet modern approach. Again my only complaint is the backs but when the fronts look this good and the rest of the inserts and parallels are this fun I can't really say too much bad about it. 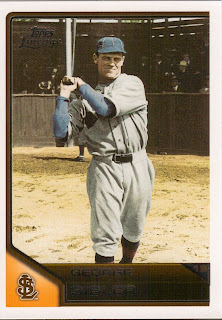 After a little research, I have found that this set will come to retail stores too, like Target and WallyWorld. Blasters come 7 packs per box plus a guaranteed mini relic (for the assumed $20), which seems pretty good once you look at the relic checklist. Some duds but some big names on there too.

Also, some folk on the Blowout card forums are bitching about this not being a set to make your money off of. Clearly this is a true collectors set and not a Bowman product just to make money off of. I feel that Topps put some good effort into this release and it should appease real collectors (not those looking for profits) in a good way.
Posted by moremonkeys138 at 1:07 PM