the good side of ebay (for me)

Remember last post when I was talking about the Triple Threads I had ripped? Do you also remember the post I had before that one talking about that seller on eBay that expected too much for his card? Well, this post will sort of tie them both together.

I had mentioned that I had grabbed some Triple Threads and Marquee singles and that I would show them when they came. Well most of them have so I may as well show 'em off. 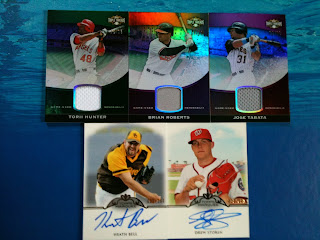 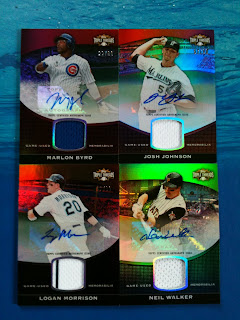 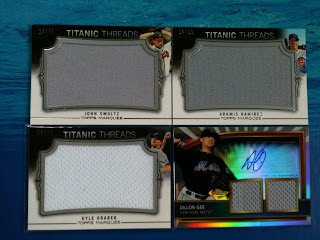 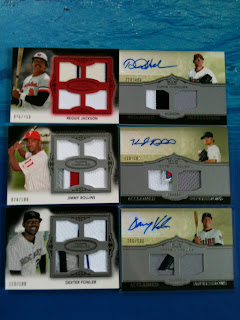 Note the Drabek. This was the card I was chasing from the seller who wanted too much (he relisted btw, with a $19.99 buy it now and it didn't sell, now he has it up again with a $29.99 buy it now or best offer, whatever dude). Like I had mentioned this cards patch wasn't as nice but it is a little more unique. I can't tell what its from but maybe a fellow Jays fan (or even a non-Jays fan) could tell me where the left patch comes from. The Danny Valencia is also my new player to collect. This card is absolutely sweet with the left patch being the Majestic logo. I'm watching a triple relic/auto of his from Threads this year too.

Finally some Drabeks and a triple relic: 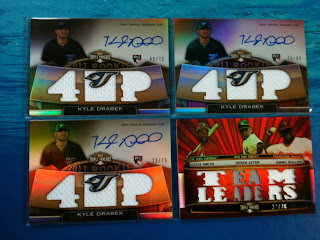 Yeah, I went a little nuts but at least they are parallels! Well, one is numbered to 99 and the other two to 75, so technically I do have a duplicate. The Smith/Jeter/Rollins seems like its a huge card but it really doesn't go for much on the 'Bay. See? Thats why eBay is great. I snagged all these for super great deals. Now sure some of these aren't great players but they are nice hits from super premium products. Some I looked for, some I caught them right before they ended and got lucky with a really low bid. I took the stance 'if I win, I win cheap, if I lose, no biggie'. There are still a few on the way but nothing big. If I come across something big, I'll be sure to post it here.
Posted by moremonkeys138 at 1:41 PM