Ah the legends variations. I still remember coming across my first one, Ryne Sandberg, in the early days of my re-entry into the hobby. Sure it was only about a year and a half ago but it seems like forever. I had no clue what I had and assumed that Topps put in older players in the mix of the base set. A short time later, I pulled Robin Yount. Both of these are featured below. I know these tend to be the bane of some collector's existence with them being short prints and all but you don't have to collect them nor are they part of the set officially. I like them though and I made a valiant effort to collect them all.

Today, I begin the legends variations series of posts, with the offerings from 2010 series 1. There are a total of 20. 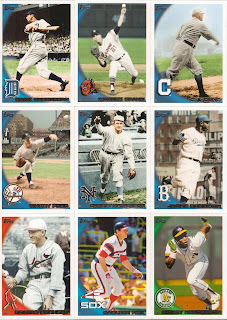 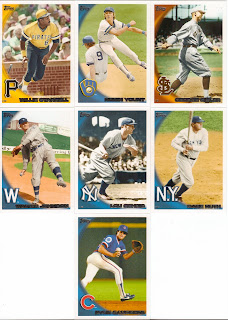 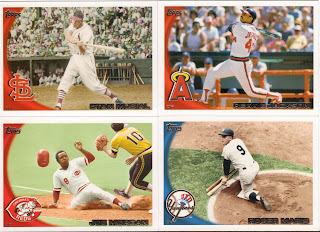 Like I had mentioned a few times before, series 1 is the most difficult to finish. I assume it could be due to a lower print run than series 2, or that it is older and most were probably discovered and sold shortly after release. I'm just late to the party. I noticed the hardest ones to get were Greenberg, Musial and Maris. The Hornsby, Morgan and Reggie don't appear too often either. The best pick up I had in this lot (and out of every vintage legend I've ever obtained), was the Whitey Ford. I found him in a ten cent box at a local show. Ten cents. Obviously it was a mistake on the dealers part but who am I to argue? Stay tuned for series 2 next!
Posted by moremonkeys138 at 2:27 PM