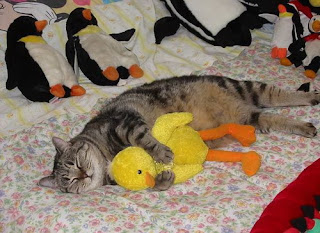 In case you haven't noticed I've completely checked out. I lost my interest in collecting for the time being, probably until series 2 comes out in early June.

I'm not sure what it is really. Maybe there is just a lot going on right now. Or I'm completely turned off by new sets. Who knows.

So I'm on a bit of a blogging hiatus.

I'm still reading, trading and the like, I just don't have much to say up here. I seem to get this way around this time of year for some odd reason, even though I should be fully focussed on baseball, seeing as how it is the beginning of the season.

I am still watching games and paying attention to the sport, I'm just burnt out on cards.


Break guys I haven't forgotten about you, I'm going to the post office tomorrow. I've been under the weather all week and It's been slowing me down on all fronts (I even left work early last week, three days towards the end of the week).


I haven't bought anything since my grossly disappointing Gypsy Queen blaster when that came out, with the exception of one card. 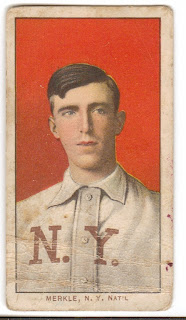 I won it on a whim, as I searched for '1909 t206' on eBay and ending shortly was a guy who had a bunch of Hall of Famers and significant players from the T206 set. Merkle was ending in about 25 minutes so I threw in a bid and I won. It came today. Great card of a very interesting player from baseball's historic past.

I'll be back, hopefully sooner than later but for now, I just need some time to regroup.
Posted by moremonkeys138 at 12:14 PM