where i've been, where i'm going

First off, a huge welcome back to BA Benny! We haven't heard from Mike since September and it's great to see him back. If you're a newer blog and haven't checked him out yet, go ahead and do it. He's a great trader and blogger so give him a try. Welcome back to the insanity friend!

Second, remember the card Napkin Doon posted, the one I traded him? Well, this is what he sent in return: 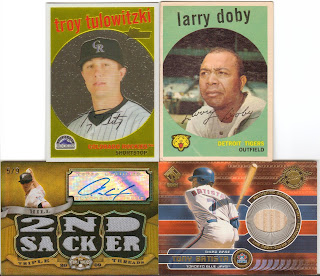 Great stuff! The Hill is even nicer in person and the '59 Doby is killer! I'm not sure if it was intentional but great going on the matching Doby/Tulo pair, they're both sweet. The Batista relic marks my third from this Pacific relic set. Wasn't this the set they found that corked Manny bat? I think it was.


Third. Where I've been.

Well, physically I've still been here. Commenting and reading your posts as usual but I've not written anything. Why not? Well, the first part of that has to do with the lack of things to say/lack of baseball cards obtained. Although I saw some 2012 Topps Archives on eBay and they look pretty cool. Can someone who bought some confirm that they have stat backs or failure backs (like Lineage)? I'd love to know. Also I picked up a few packs of this year's Bowman and I ahev to say I'm kinda impressed. I really like the white border and design overall. I'd probably collect it if it weren't, you know, Bowman.

Card-wise though I've been here: 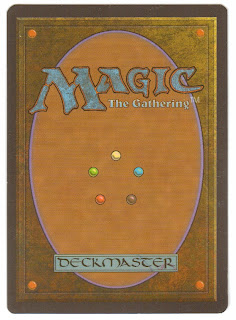 But Magic hasn't just provided me entertainment over the years, it's done so much more.

Back in 1995 I was in middle school. I had very few friends and was more of a loner due to my social awkwardness. One day at the local comic shop (which I ended up working at in 1999-2000) I decided to pick up a pack of Magic just to see what it was all about. At first it didn't click but then I was at that same store a different day and I got to talking about the game with a player. He donated a few cards to me and I was hooked since.

You see, Magic is a game for two or more players, you can't play it by yourself. If I wanted to play, I'd have to get out there and meet people and play with them. And I did. We spent many a summer at that shop, playing the days away, trading, getting big ten player games going. It was good times. In fact most all the friends I have I can attribute meeting through that shop and the game. The game forced me to be social, to come out of my shell if you will and it did. Sure I'm still a little awkward sometimes but I'm way better off now than I used to be. Granted that was 17 years ago but still.

So how does this translate to now? Well a friend of mine is going through a really rough period in his life right now and I had him over one day just to talk about what's been going on and such. We made our way to Target that day and I checked out the card aisle. Definitely not unusual. We both saw the new Magic set packs and decided to pick some up and since then it's been back on for both of us. It's good because its a nice distraction from reality in what he has going on and good for me because its just good to play the game again.

Does this mean I'm done with baseball card collecting? Certainly not but I have scaled back what I buy, which I wanted to do anyway. Too much just sitting around of sets I'm not collecting. I'll try Archives and will definitely be in for series 2.

That being said, do any of you play or used to play Magic? Anyone with cards laying around that you don't want, let me know and maybe we can trade for some baseball for Magic or something.
Posted by moremonkeys138 at 11:58 AM