file this under the "why do i even bother?" category

I haven't picked up much in the way of cards, as I've continually stated in the past few weeks.

The local shop owner asked if I could work this week and I told him I could but he didn't get back to me, so I decided to hop on down there. Not only to give him my answer in person but to see what else was up. See what he picked up during the week and a half or so I hadn't been down there.

The shelves were fully stocked with stuff I didn't really want to buy. If you've been reading this blog long enough I have a real weakness to opening packs and boxes. I have a real problem. I often buy stuff I don't need just to rip packs. Well yesterday was no different.


I stupidly decided to try a box of 2012 Museum Collection. I knew I shouldn't have done it but I did anyway. See, a real problem. My curiosity and hope always get the best of me, then I spend money I really shouldn't.

Anyway I guess the cards look nice although they look like an Upper Deck product: 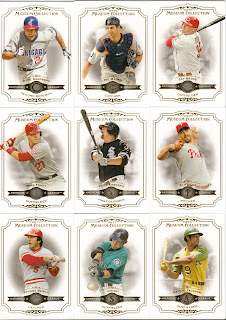 Ok base cards I guess.

The parallels and the two base that I'm keeping (Crawford is going to the LCS): 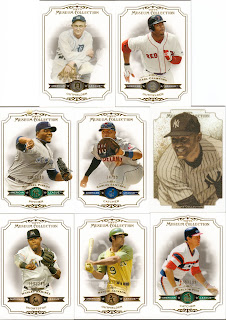 
Now the real disappointment of the box, the hits: 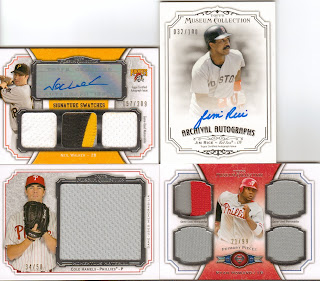 Boy, what an average bunch of cards. I was so underwhelmed with this box after opening it up, that the two people there could tell I wasn't happy with the results. Sure its always a gamble and the payout is rarely there but you got to hope for something though right? I knew I shouldn't have done it, I'm just so stupid like that sometimes.

Overall an ok set but I'm not buying any more, even for guys I do collect. That and I'm not doing high end pretty much ever again. I can't keep up with this stuff any more, I just don't have the desire at all. Looks like its vintage and low end for me from here on out.

So maybe it's not a total loss. If I can resolve to sticking to the above statement I'm sure I'll be better for it.

I would say these cards are for trade but there is absolutely nothing I am looking for.

I do plan on doing a Draft soon though and these will more than likely be in there. I've built up a nice cache of autos and relics so it should be good. I have no details yet but would anyone be interested in another Draft over here? I always try to make them as fun and affordable as possible, so let me know if you'd like to be in.
Posted by moremonkeys138 at 12:30 PM