So Bowman Platinum dropped today. Well, for some lucky retail stores, it was yesterday.

One of those lucky stores was my hometown Target. While on a small grocery run, I stopped by the card aisle and lo and behold they had blasters of the stuff: 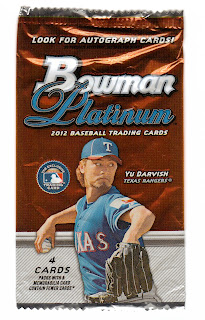 Four cards per pack is a little light, equalling just 32 cards for $20. The ratio just screams unfair but it is a slightly higher end product than regular Bowman.

Well, I'm too lazy to actually scan regular cards but I'm sure someone up here will. I can say that I don't like the design as much as I did last year but it's not horrible.

My blaster (maybe the 5th or eight packs) did contain this: 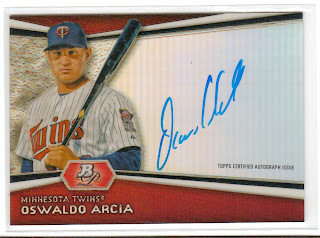 Yep, a prospect auto of a guy I never heard of. That never happens in Bowman, so I was a little shocked.

Anyway, I checked eBay to see if he was selling and there was only one other of his cards up and it was ending in 2+ hours (and at $14.50 with 10 bids). I listed it anyway, with a buy it now of $25 (with free shipping!) and went off to eat dinner.

After eating I decided to check on the activity of that first auction and I noticed mine had sold within five minutes of me posting it. Not too shabby seeing as how even after fees and shipping it still payed for the blaster. The other one ended at $15.50. So either way, I win.