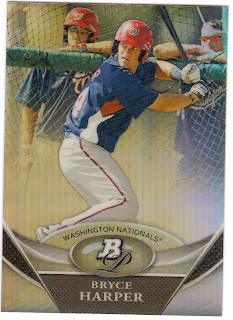 I can admit it. I was wrong.

After watching the Yankees take on the Nationals this weekend, I have to say that I was wrong about my judgement of Bryce Harper. The kid has it. He plays like a big leaguer and does what he does pretty well. Then him calling that reporter a clown for his asinine question? Even better.

I think what happened was the Topps Hype Machine (TM) made me entirely sick of the kid before he even stepped onto a Major League field. Topps is adamant about shoving him down our collective throats because it's what the collectors want. Well the ones who sell on eBay do anyway, cause they're the ones making bank off him.

Anywho. I do wish him the best of luck in his career and will try to watch him on chances I get, which will be few due to Nationals games not being televised around here unless they are playing the Mets or the Yankees.
Posted by moremonkeys138 at 12:27 PM